The Flame Stopper II, originally designed by Corgi, debuted in the Europe-exclusive Auto City line. After it’s first couple of appearances, it was then included in various mainline series. It’s original name (given to the tooling by Corgi) was the ERF Simon Snorkel. This tooling is loosely based on an ERF SS fire truck.

The base of the casting reads Fire Engine.

The Flame Stopper II has come out in the following 1/64 scale versions:

The Flame Stopper II originated as the Husky model shown above. 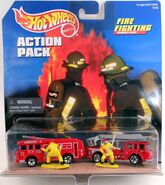