This casting depicts a pro stock Ford Focus as campaigned by the late Shaun Carlson in 2000. The car was built on, in Carlson's own words, "a bare Ford Focus body shell that was primered" that was shipped to him in a giant crate as the car had yet to be released to the public eye at the time. The car featured an Esslinger engine and a MoTec M48 ECU; Shaun's brother Trevor worked on the car as well.

The casting's wing can be tilted back and forth into two positions, although this does not appear to have been an intended feature.

The Ford Focus has come out in the following 1/64 scale versions: 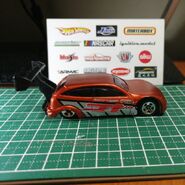 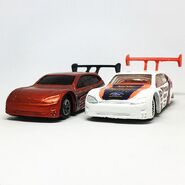