The Ford Fusion is a five-seat mid-sized sedan introduced in 2005 and produced until 2020. The car was manufactured in Mexico alongside its badge-engineered versions, the Mercury Milan and the Lincoln MKZ.

The casting was originally released in 2006 as part of a tie-in with Target and the Ford Motor Company, where diecast models of the Fusion were packed into some 600,000 boxes of Kelloggs cereal; specifically, Froot Loops, Apple Jacks, Frosted Flakes and Cocoa Crispies.

One of the boxes, when opened, contained a special Ford Fusion with Target logos all around; the person who pulled that Fusion won a 2006 Ford Fusion from the Ford Motor Company; it is not entirely clear if the winning prize was ever claimed.

The casting was retooled in 2007 to feature a lightbar so it could pose as a police vehicle; the lightbar is actually part of the windshield. The casting has stayed that way since.

The Ford Fusion has been released in the following 1/64 scale versions:

Born: 2006
Birthplace: Dearborn, Michigan, USA
Designer: Ford
Specialty: With its sleek shape and a light bar on top, this Hot Wheels® version was made for high speed chases and hot pursuits! 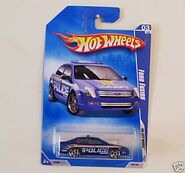 The first edition of this model have either the logo or the letters backwards.