The Ford GT-40 is a Hot Wheels casting which debuted in the 1999 First Editions Series. It is based on the MkII version and was designed by Phil Riehlman. It has been used numerous times since its conception.

The real-life Ford GT-40 MkII upgraded to the 427ci V8 from the 255ci of the MkI, and featured a 4-speed gearbox built by Kar Kraft. The MkII GT-40 raced very successfully at endurance championships and notably dominated the 1966 24 Hours of Le Mans in a 1-2-3 victory.

The tooling for the car was completely updated in 2019; featuring a smaller grill, improved interior and now features a post-post construction as opposed to post-tab construction.

The Ford GT-40 has come out in the following 1/64 scale versions: 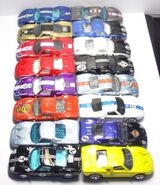 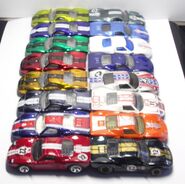 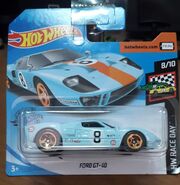 rear of the old casting & New casting
Add a photo to this gallery
Retrieved from "https://hotwheels.fandom.com/wiki/Ford_GT-40?oldid=326384"
Community content is available under CC-BY-SA unless otherwise noted.