With the continuing success of the GT40 MkI and MkII, for the 1966 Season, Ford sought to make a lighter and more aerodynamic version of the GT40. The result was the Ford J-Car. Unlike the previous versions of the GT40, the J-Car was built in the USA by Kar Kraft. It still retained the 427ci 7.0L 'Big Block' from the MkII, but the body and chassis were ditched for a 'breadvan' design with a honeycomb aluminum tub chassis.

One car was built and was sent to Le Mans 1966 for testing where it posted the fastest time in practice sessions. Despite this, Ford decided to race the GT40 MkII which had proven reliability, and fortunately so because they came away victorious with a 1-2-3 finish.

After Le Mans, development continued on the J-Car project with another car being constructed. Driven by Ken Miles (1966 Le Mans 2nd Place) during a testing session, the J-Car suddenly lost control and the end of Riverside Raceway's one mile long straight. Spearing off the track and over an embankment, the car hit the ground and flew end-over-end several times, ejecting Miles, before coming to rest and bursting into flames, totally destroying the car and killing Miles. After the accident, a more conventional and aerodynamic design with a stronger chassis was implemented, known as the Ford MkIV.

The Hot Wheels Ford J-Car was designed by Harry Bradley, and debuted in the 1968 Lineup as part of the 'Original 16' castings. It was painted in various 'Spectraflame' colors as well as white enamel, mimicking the real car. It features an opening rear hatch which displays the engine and #1 racing stickers and stripes. It was manufactured in both the USA and Hong Kong factories, with some differences between the two. USA cars only came with clear windows, had an unpainted metal base, and most commonly a black interior (Dark Brown and Tan can be found). Hong Kong cars came with blue windows, a painted base which extends to the sides of the car and only black interiors.

Some early produced Hong Kong J-Cars could be found with vents in the top of the hatch, these were omitted later in production. Also, some cars have what is known as a 'Hidden Hinge' where the hinge for the rear hatch is designed in a way that cannot be seen, this is only found on early production Hong Kong cars. Another variation is the size of the steering wheel, again, this is only found on Hong Kong cars. Early USA built cars have a hatch that opens completely, while later in production a stopper was added to prevent this from happening.

The 'Enamel Blue' version of the J-Car is rumored to have been a promotional give-away at the 1969 Indianapolis 500, although there is no evidence to back up these claims. Contrary to the name, these cars are actually Spectraflame blue, painted over the top of white enamel.

The 'Original 16' castings were packaged with a metal 'Collector's Button'.

In 2010, the Ford J-Car was retooled for the HotWheelsCollectors.com Series 9 Neo Classics Series.

The Ford J-Car has come out in the following versions:

The Ford J-Car has come out in the following versions:

The Ford J-Car has come out in the following re-tooled versions: 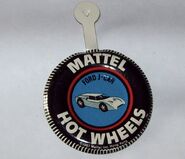