Fright Cars were originally a series of Wal-Mart Exclusive Cars on single cards, in 2006. In 2007 Target had their own Exclusive 5 Pack set to add to the series, also known as the Fright Cars 5-Pack / Gift Pack set, and the Target Exclusive Gift Pack was called Scary Cars 5-Pack in 2008. Even before 2006 Mattel had a series called Halloween Highway Series that ran from 2002 to 2004, that were 4 different 2 car packs. After 2005 the team at Hot Wheels saw the demand of bringing back the series to the Hot Wheels collector again in 2006.

In 2008, as part of a Wal-Mart Exclusive, Hot Wheels added a twist for the collector again, by adding the Chase Car into the Fright Car Series only on a single card 8 car set. The Chase Car for 2008 is called Invisible Phastasm, it makes it's second debut in this series. The first was in 2006 Fright Cars Series, and this time around it makes a great come back for the Chase Car. The Invisible Phastasm is an all clear plastic car, just leaving the rim of the OH5 Chrome and the axles to only have Metal.

Although there wasn't a Halloween assortment in 2018, "The Nightmare Before Christmas" 25 Years set was released in autumn as a Kroger store exclusive and might be considered a substitute assortment for the frightful season.

Single cards and also this set had Real Rider wheels

This is a list of the Target brand of the 5 Car Pack, and the Zombot was not part of the Target Exclusive set, only leaving 7 cars, and in order to get all 7 cars, you had to buy 2 sets.

This is a list of the Target brand of the 5-Pack "only". 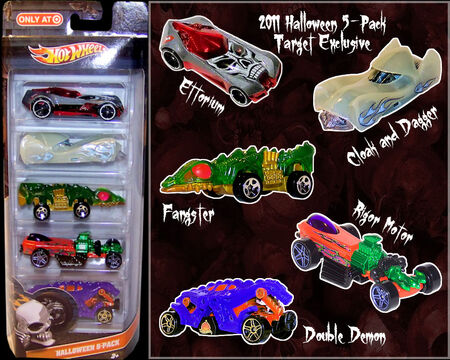 There are, at least, 3 variants of this 5-Pack with the middle 3 cars being different combinations. These cars are the same as the 2012 basic car releases and do not have special Halloween-themed decoration: 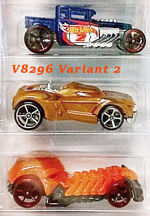 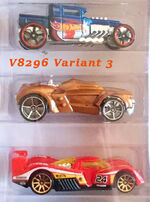 This series of 8 cars was supposed to be a Kroger exclusive series. However, they were found at Walmart stores in July. This series also introduced two new wheel types: the Skull and the ORSkull.

Spookily speeding around the track while scaring all the competition away!'