General Grievous was a brilliant Separatist military strategist and a feared Jedi hunter, known for his ruthlessness and hacking cough. His body itself was a weapon, with his four arms, allowing him lightning quick strikes and devastating blows. But he was also quick to run from a fight, a tactic that worked until one final meeting with Obi-Wan Kenobi.

The General Grievous has come out in the following 1/64 scale versions:

The ruthless cyborg General Grievous is unforgiving in his thirst for victory, as seen in the battle-hardened exterior of this savage racing vehicle.

Armed with lightsabers won from the brutal conquests of countless Jedi masters, and enhanced with double forward wheels for machine-driven speeds, the physical advantages it commands are only surpassed by the skilled tactical intelligence hidden inside.

It's a lethal combination capable of overwhelming any enemy! 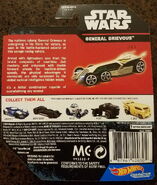 Add a photo to this gallery
Retrieved from "https://hotwheels.fandom.com/wiki/General_Grievous?oldid=301194"
Community content is available under CC-BY-SA unless otherwise noted.