First released into the 1991 regular line-up, as Goodyear Blimp. This advertising promotion became an instant success - with the ability to add slogans or anything a customer might want it to say.

As shown in the picture above, the tail can be rotated by hand to reveal two different messages on the side of the blimp. For example, the Top Speed GT blimp is just shown with the logo (that cannot be rotated). When removed from packaging, the tail rotated by hand and the side reads "HI MOM", but when the tail is rotated again it shows the current Hot Wheels logo.

Although Goodyear separates their name with a foot logo between the two parts of the word, Hot Wheels spelled it out as one word. (Which is correct.)

The Goodyear Blimp has come out in the following 1/64 scale versions: 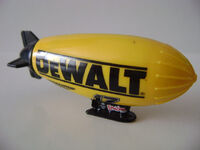 Retrieved from "https://hotwheels.fandom.com/wiki/Goodyear_Blimp?oldid=319954"
Community content is available under CC-BY-SA unless otherwise noted.