The Grass Hopper is a Hot Wheels casting designed by Larry Wood which debuted in the 1971 Hot Wheels range of vehicles. It is based on the tried & true Willys MB US Army Jeep. It is a modified 'hot-rodded' version with not one, but two blown V8 engines. One in the front and one in the rear bed. It features a removable white plastic roof and an assortment of tools cast into the side of the vehicle: pick, shovel, canteen, gas can, tool box etc.

Its initial release was only manufactured at the USA production facility and all came with a black interior and a light-gray tinted glass. It came packaged with a metal or plastic 'collectors button'.

In 1974, the Grass Hopper was re-tooled without the second rear engine and removable roof, and in 1975 it was re-tooled again without any engines. Both the 1974 and 1975 versions also had the tools removed. The 1975 version was released in Italy by Mebetoys in a small cardboard box.

In 1975, a modified version was released called the Gun Slinger. This vehicle was modeled after the 1975 version with no blown motors, except this time it had an enormous machine gun mounted in the rear.

The Grass Hopper was re-tooled and re-released in 2010 for the HotWheelsCollectors.com Series 9 Neo Classics. It was modeled after the 1974 version with only one motor and renamed 'Mountain Goat'.

The Mountain Goat has come out in the following 1/64 scale versions: 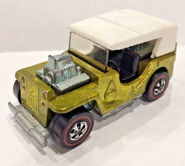 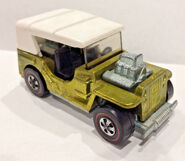 Add a photo to this gallery
Retrieved from "https://hotwheels.fandom.com/wiki/Grass_Hopper?oldid=329286"
Community content is available under CC-BY-SA unless otherwise noted.