Hot Wheels Highway 35 World Race is a series released by Mattel in 2003 to commemorate 35 years of Hot Wheels. The cars were released in conjunction with the Hot Wheels: World Race racing video game and a full-length video release of the same name. A separate wiki based on the comics and video can be accessed here [1]

On the Release Date 2/10/2004, HotWheelsCollectors.com had a contest where members could win a Limited Set, 36 in a complete set and limited to no more than 1,000 pieces.

The 5 teams, each having 7 drivers & vehicles, are shown below.

Each of the Wave Rippers team's seven racecars is capable of operating on the surface of water, or even beneath the waves. Hailing from islands and beaches all over the world.

These are the racers who were born and bred to be fast and furious. Hailing from major cities around the world, the members of the Street Breed team are streetwise and serious about winning. 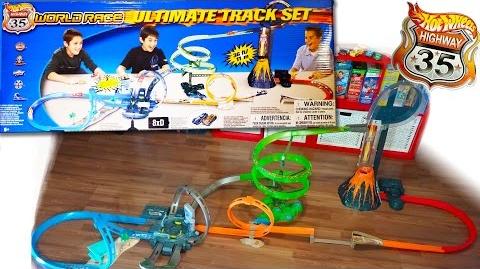 These cars were available as 2003 Toy Fair exclusives to promote the release of the World Race line.