Hill's was a department store which was in operation from 1957 to 1999. During the last few years of its existence, Hill's commissioned several Hot Wheels sets and vehicles to be sold exclusively at its stores.

From 1995 to 1997 Hot Wheels produced exclusive 'Year in Review' box sets for Hill's which featured all twelve First Editions from the year. They were limited edition (7000, 5000 and 5000 respectively) and were the first time that collectors could purchase all the year's First Editions in one set. Instead of including all 40 First Editions for 1998, the box set (now named Cool 'N' Custom) only featured eight vehicles.

In addition to the yearly box sets, Hill's also sold one exclusive premium vehicle each year from 1995 1999 in a special box labelled "CLASSIC Limited Collector Edition".

"Now for the first time, you can get all 12 cars from the 1995 New Model Series in one special collection. Introducing the 1995 Year in Review. This special set was created exclusively for Hills and is featured in a handsome display. It's a great way to start your own HOT WHEELS collection!" 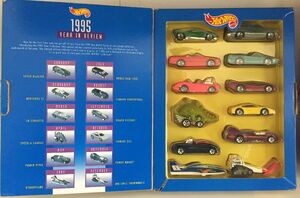 "Mattel and HILLS proudly join forces to present the second in the series - Hills Year in Review II. This exclusively-designed package features all 12 1996 FIRST EDITIONS cars with cool wheels and gleaming paint jobs. You'll be singin' Jingle Bells with the December car, offered for the first time at retail in this set!  Start collecting fast, or add to what you have with this limited edition set. Just one in a series of 5,000! You will treasure it for years down the roadway!" 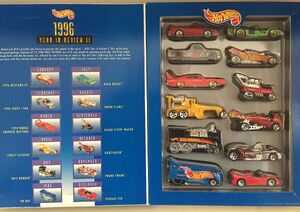 "Mattel joins Hills in proudly presenting the third in the series - Hills Year in Review III. Exclusively designed for Hills, this collection features all 12 1997 FIRST EDITIONS CARS. This is one in a series of 5,000. Start a collection today, or add to yours with this limited edition set. Collecting will become your driving passion." 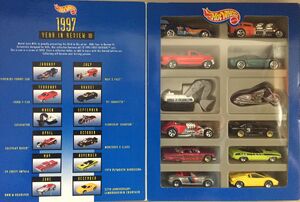 "You can't please all of the people all of the time. That old saying is never more true than in the automotive world, where there are hundreds, even thousands of models from which we can choose. Yet some of us can't find the car that is just right. So we drop, chop, channel, paint, jack up, lower, add blowers and basically create our own custom cars to better fit our unique desires and personalities. Hills joins Mattel in pleasing custom car fans with this exclusive COOL'N CUSTOMS special edition car set. Eight newly-tooled 1998 FIRST EDITIONS cars that celebrate our need to see and be seen with some of the coolest hot rods to ever burn rubber" 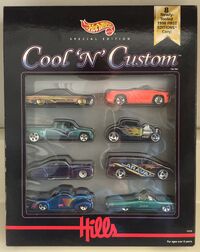