This Hiway Hauler uses the same cab and an even longer version of the base used for the American Tipper, American Hauler and Movin' On castings (theirs being originally modified from the Road King Truck) with a third axle, along with a new box. Based on a '70's COE Kenworth.

There is another version of the Hiway Hauler, which was released in 1992. See Similar castings below.

The First issue of Hiway Hauler has come out in the following versions: 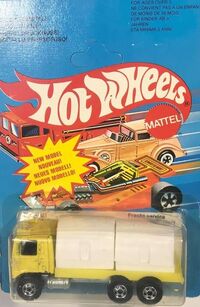 Hiway Hauler Masters of the Universe

Master of the Universe box with Goodyear cab. Unfortunately the boxes are easy to change, so being out of the package. There is no way to authenticate it.

Barbie Made in India