The Honda Civic Si was a performance-oriented version of the sixth-generation Honda Civic produced from 1999 to 2000. Only available in a coupe body style, the car was powered by a 1.6L B16A2 inline-4. The Si moniker was mostly used in America as Japan used the SiR and Type R monikers and Europe the VTi. Despite its short production cycle the car gained a dedicated following.

The Hot Wheels casting replicates a specific 2000 Honda Civic Si entered by Super Street Magazine into the Honda Civic Si Challenge; the goal of the challenge was for four automotive magazines (Car and Driver, Sport Compact Car, Super Street and Popular Mechanics) to turn a pre-production 2000 Honda Civic Si into a modified ride with a $10,000 budget within five months, the deadline being 30 September 1999; the cars would be judged on appearance, performance and emissions. The build was overseen by Dave Martis. Modifications to the car included a Wings West Avenger bodykit, Progress Group coilovers, JUN Auto Mechanic-tuned naturally-aspirated B16A2 engine, short-ratio transmission, titanium exhaust and ECU programming, with the engine tuned by Susumu Koyama, Honda Optional Equipment wing, Versus Motorsports carbon fiber hood, Endless brake pads, Cusco LSD, Car Craft custom interior, Modern Image wrap and 225/40R16 Yokohama A038s. The car was nicknamed Ichiban (lit. "No. 1") or "Itchy" for short and won the competition. The car is currently located in Honda America's private collection and is not street legal, having been showcased at a number of SEMA events since.

The casting was introduced into the Hot Wheels mainline by Alec Tam in 2001, with Martis assisting with the design of the car and Eric Tscherne doing graphics. The casting was retooled for 2021, where, like some other castings, the entire tooling was updated. Changes include the addition of side mirrors and a glass moonroof, the removal of the front passenger windows, a new bodykit with a new hood style, taller rear wing, new interior and lowered ride height. This version of the casting is noticeably shorter than the older version.

The Honda Civic Si has been released in the following versions: 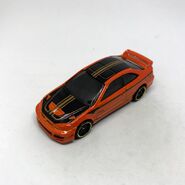