This Firebird was introduced in 1978 as the Hot Bird in the Flying Colors series in black and with Blackwalls, (bw). It was available in the Thundershift Roarin' Raceway. In 1979 it was gold-plated as part of the Golden Machines 6-Pack. In 1980 it was changed to brown in the basic line for a short run and then changed again to blue. In 1982 it was changed to black again and joined the Hot Ones series. The Captain America also uses this casting. Several paint and tampo variations followed from "glitter black" to metalflake blue. There are also SEVERAL tampo variations over the years.

The original Hot Bird was made in Hong Kong, Malaysia and China. In 2006 a completely new casting was made and produced in both Malaysia and Thailand. This new casting was used from 2006 on. Although very similar to the original, the dimensions of the car differ. The first noticable difference is the size of the shaker scoop on the hood. The new version's shaker is slightly longer than the old. Also, both bases are different. A few other differences are the detail of the rear tail lights and the hood bird tampo. One constant similarity of both models through the years is they have both ALWAYS been all diecast. This Firebird also appeared in Burt Reynold's popular feature film "Smokey And The Bandit."

All hood bird tampos of the original Hot Bird have the head facing to the driver side of the car. The collector #469 hood birds are the only ones that face the passanger side.

The very last of the original Hot Birds was produced for the 50' track set. Although it is a Hot Bird, the name on the base says Pontiac Firebird.

The Hot Bird Has been released in the following versions:

On the back of Race World Volcano card

My Best Hot Birds. A Protype and 3 LEO India Variations.

This came to me from Australia.

Malaysia scratched off the base like other LEO India variations.

First Edition of this casting 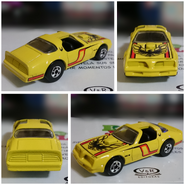 hot Bird The Hot Ones

Hot Bird - Treasure Hunt 2008 - 08 - 3
Add a photo to this gallery
Retrieved from "https://hotwheels.fandom.com/wiki/Hot_Bird?oldid=358887"
Community content is available under CC-BY-SA unless otherwise noted.