Hot Heap was one of the cars released in the original 1968 Hot Wheels series. The Cars were packaged with a metal 'Collector's Button'.

The Hot Heap was based on the real-life show car "King T", also known as "Tognotti's T".

This extremely popular show car won several First Place trophies in its day. Not the least of which were 1st in the Winternationals the first time entered, a 1st in the Oakland Roadster Show (Grand National Roadster Show is the true name), and many other shows in that era.

The Hot Heap came from 2 different plants (US and Hong Kong) there are several ways to tell the difference in the two castings. In the US casting, the engine was set forward with a round transmission hump at the beginning with the transmission hump becoming square towards the end of the run in 1971. The base was fairly plain with no details other than the exhaust pipes and the logos on it (Hot Wheels logo, US patents pending, etc.) The trunk was shorter on the US version and the leaf spring on the back was shorter and less detailed. The wheels also had a duller finish to the chrome plating. It came with a clear windshield. The Hong Kong casting had an engine that was set back against the firewall. The base was more detailed with the entire drive train molded into the base. The chrome on the wheels was shinier. The trunk was longer and the leaf spring on the back was longer and more detailed. It had a Blue-tinted windshield.

The Hot Heap has come out in the following 1/64 scale versions:

The Hot Heap has come out in the following 1/64 scale versions:

The Hot Heap has come out in the following retooled 1/64 scale versions: 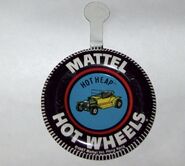 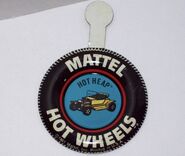