Hot Wheels: Beat That! is a video game released in September 2007 developed by Eutechnyx and Neversoft. It's a great first race game for kids age 3 and up. Simple, fun racing with your favorite Hot Wheels cars. The game is available for PC, Wii, PS2, Xbox 360 & Nintendo DS

New events and cars can be unlocked by winning an event or achieving the 2 secondary goals for each event. 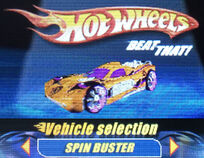 Spine Buster misnamed Spin Buster in DS Version
Add a photo to this gallery
Retrieved from "https://hotwheels.fandom.com/wiki/Hot_Wheels:_Beat_That!_(Video_Game)?oldid=164029"
Community content is available under CC-BY-SA unless otherwise noted.