Velocity X is a Racing/Battle game. It was released for Gamecube, PlayStation 2, Game Boy Advance, and PC. All games gameplay is virtually the same. It features many cars from Hot Wheels Bash Arena, the previous game, such as Sooo Fast, Evil Twin, Muscle Tone, and Mega-Duty as well as new cars such as Lakester and Rigor Motor.

There are 4 stats that are measured: Speed, Armor, Grip, and Stunt. The game also features the ability to do stunts (Side Spins, Rolls, and "Breakdancing" which involves flipping side over front). These stunts earn you points, ranked by Good, Great, Amazing, Incredible, and Ultra Cool. Speed is obvious, Armor is the ability to resist damage, and grip is handling. Unlike Bash Arena, Velocity X relies on weapons to do damage (To Find a list of weapons, look below). Also unlike Bash Arena, it has multiple game modes. Adventure mode follows the quest of the Justice family as they battle the evil Otto Von Diesel, and get back their cars. Challenge Mode lets you pit your skills against challenges such as collecting gears, smashing crates, Avoiding Obstacles, and earning points. Drag Race mode lets you go up against other cars, and see who gets to the finish line first. Battle mode is similar to Drag Race, except you have to disable all cars. Disabling means defeating. Finally, Joyride mode has only two goals, collect the 10 red gears scattered around the track, and find the hidden key (there is no time limit).

Unlocked by Gears in Joyride

Max Justice is the son of a brilliant scientist named Peter Justice who is working on developing supercars. When a figure from Peter's past, named Otto Von Diesel, comes back into their life, Max must fight his way through countless enemies, five areas, and Otto himself.

When out racing, Max recives a distress call from home. After finishing the race with Nitro Byrnes, he returns home to find it ransacked, a majority of their Hot Wheels cars missing, and their robot Gearhead tied up. Gearhead informs him of what happened via video screen, but they can't talk much before Gears detects a bomb in a Hot Wheels tire factory.

On the way, he encounters suspicious characters driving Muscle Tone , Hammered Coupe , and Flashfire . By the time Max gets to the factory, the bomb goes off and the factory is destroyed. Gearhead finds out that the bomb in this factory was just a diversion. Then Gearhead detects another bomb. Max heads out with the orders to dispose of the bomb at an abandoned building. After fighting his way through the unknown gang, he disposes of the bomb. Then the guy who raced Max earlier, Nitro Byrnes, calls and demands money for computer disks. Max accepts the challange. His father, Dr. Peter Justice, arranges the money, Nitro provides an escort, and Max delivers the money. After beating Nitro in a race, Nitro gives back the car, Jaded, but can't give them the disks. Then Dr. Justice tells Max about a Uranium shipment, and Max heads out to destroy it.

The main protagonist of the game. Max was just a normal teenager (or as normal as can be if your father is a scientist that makes supercars called Hot Wheels) until Otto Von Diesel ransacked his house and stole all his cars. Now he must battle Otto's lackeys in order to reclaim all Hot Wheels Car and its HW Prototype 12. His personal car is the MS-T Suzuka.

Max's father and the genius behind Hot Wheels. All was going well until Otto Von Diesel, his former friend and co-worker, stole all his cars, and is now trying to kill them all. He was forced to hide out in Turbine Sands, giving Max advice and missions via video screen.

Max's girlfriend, Sparky helped Dr. Justice look for something in Crankshaft Bay, and subsequently was taken hostage by Backroads Belcher. Max rescues her, and she helps unravel the mystery of Otto Von Diesel. Later, she develops a particular animosity to Fastlane Frescatti, Otto's female henchman. Her personal car is Hyperliner.

A robot built by Dr. Justice, he acts as a correspondent to Max and gives him missions.

The main antagonist of the game.

A no-good street punk recruited by Otto to beat Max in a Drag Race. After he fails, he gets revenge by planting bombs in two Hot Wheels factories. After Max foils his attempts, he calls in and asks for a trade: a suitcase full of money for a pair of computer disks and the car Jaded. After Max defeats him, Nitro says he doesn't have the disks and runs away. He later faces off against Max, alongside Belcher, to keep him from finding Otto. His personal car is Jaded .

A rough-and-tough cowboy, he and his gang were recruited by Otto to look after Turbine Sands. After Max destroys Otto's uranium shipment, and beats his gang, he delivers an ultimatum, bring him the Uranium,or die. Max chooses to bring the Uranium. After making his way to Belcher, he battles him in Turbine City. He then threatens Sparky and signs off. Later he fights Max at Otto's hideout and loses. He drives the Evil Twin .

A female racer recruited by Otto to guard the Crankshaft Bay area. After Max rescues both Sparky and The Maelstrom from her gang's clutches, she challenges Max to a race. She sends a few of her gang in Greased Lightnin' s and Evil Twin's to destroy Max before hand. As usual, she fails and Max races her. She gives back her car and leaves after he beats her. She later returns, like all of Otto's other underlings. She drives the Splittin' Image II .

A man almost identical to Darth Vader, from the suit to the mannerisims. He was stationed in Burnout Glacier by Otto Von Diesel. When Max comes to Burnout Glacier to destroy a rocket made by Otto that would force a volcanic eruption, he keeps an eye on him. He tapped the Justice's phone line, he learns of a gas canister in the Combustion Cauldera. He calls in and makes a deal with Max: get the can, meet him downtown, and battle for all. When Max meets him downtown, Max wins the battle and Slick runs off. He drives the Vulture.

Apparently, Rupert already worked for Otto before things started getting hairy. After Max wipes out Slick and takes the Vulture, Rupert steps in on a conversation, and offers a wager: the Warp transmission, and a race. Even in the Arachnarod, Rupert is beaten by Max. However, the race was a diversion, so Nitro, Belcher, Fastlane, and Slick could get away with the transmission. When Max returns to the hideout, Rupert is there waiting. He drives the Arachnorod . 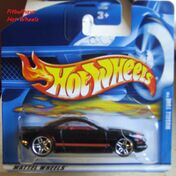 Way 2 Fast
Add a photo to this gallery

Slingshot was one of the cars that is only seen in beta version, but however it was removed in the final product for unknown reason.

Retrieved from "https://hotwheels.fandom.com/wiki/Hot_Wheels:_Velocity_X?oldid=130119"
Community content is available under CC-BY-SA unless otherwise noted.