Hot Wheels Classics is an annual line of Hot Wheels cars first released in 2005. They are marketed towards adult collectors and were originally priced around $3.99 (USD). Each car features a metal base and is released in several different Spectraflame colors. Series 1 was released in 2005, series 2 in 2006, series 3 in 2007, series 4 in 2008, and series 5 in 2009.

In 2008 First to the Market was the Vintage Classics with Collector's Button in celebration of 40 years of Hot Wheels.

This series was reduced from 30 to 15 for this year 2008 and there were 2 kinds of Hot Wheels Classics Series. First to the market was the Hot Wheels Vintage Classics with Buttons and then Hot Wheels Classics would follow in the wave of Spectraflame colors, to give the collector a total 30 in 2 different sets of 15.

Many castings in this year's release featured multiple colors and some came with a foil seal on the card and Real Riders tires and are considered Chase pieces as they appeared in much smaller numbers. 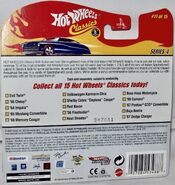