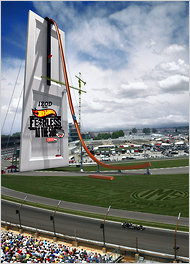 Hot Wheels For Real was the promotional name for the Fearless at the 500 Event that took place on May 29, 2011.

Tanner Foust, a member of Team Hot Wheels, a crew of stunt drivers, broke the world record for distance jump in a four-wheeled vehicle (which was previously set at 302 feet) by speeding in a life-sized yellow race car down a life-size version V-Drop track set. The door measured at 10 stories high and was built in the infield of the Indianapolis Motor Speedway.

The jump was featured in a 30-minute Hot Wheels television show that appeared after the ABC coverage of the Indianapolis 500.

Mattel joined forces with the Indy Car sponsor IZOD for the promotion.

Retrieved from "https://hotwheels.fandom.com/wiki/Hot_Wheels_For_Real?oldid=78403"
Community content is available under CC-BY-SA unless otherwise noted.