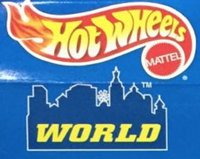 Hot Wheels World sets, which began selling in 1997 as the successor to Street Traxx, Sto & Go and Hot Wheels Auto City, are part of a Hot Wheels track system designed to look like a futuristic city. They have track called "E-Z Snap" that is used for making the owner's track their dream city. From 1997 to around 1999, the sets made were normal and realistic with some stunt elements sprinkled in, then around 2000, sets like the Powershift Garage and Crash Test started the trend of Hot Wheels World-compatible sets focusing on stunts and crashes more than an actual city.

In late 2003, some Hot Wheels World sets were re-released under the short-lived "Heat Street" (usually shown as "HEAT ST." on a street sign/skyline logo) banner, like the 2001 McDonald's, Jet Port, Copter Chase, etc. These "Heat Street" sets are most likely from outside of the US.

The last Hot Wheels World-compatible set was the Drag Strip Duel, or Speedtrap Raceway, released in 2005. These sets were discontinued as of December 2005, but sold in stores until they ran out and could not restock.

Many playsets from the Hot Wheels World and Hot Wheels Heat Street line were later reissued as part of the Turbo Town line as late as 2005 until the final sets from that line were released in 2013, reissues of Crash Curve and Radical Roadway. Apart from some new colors and stickers, the sets used the same backwards-compatible "EZ-snap" track pieces as their original counterparts.