This military vehicle was initially named Hummer. By 1998, the name changed to Humvee. See also Hummer (2002). This casting has always been made in plastic, with a metal base and has been modified (retooled) several times. Original versions has a turret-mounted high-caliber machine gun. Later versions removed the turret but kept the rear opening hatch. The latest mainline releases deleted the opening hatch.

The US Army HMMWV (High Mobility and Maneuverability Wheeled Vehicle), from which the colloquial "Humvee is derived, was fielded in 1986-88 and participated on its first combat mission in Operation Just Cause (Panama) in 1989.

The Humvee is Playable in Hot Wheels Extreme Racing Under Name 4X4.

The Hummer / Humvee has been released in the following 1/64 scale versions:

From back of 2010 Race World Battle Series card:

W5440 version on card with light 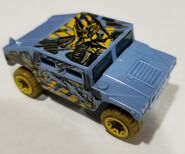 Add a photo to this gallery
Retrieved from "https://hotwheels.fandom.com/wiki/Humvee_(1992)?oldid=348722"
Community content is available under CC-BY-SA unless otherwise noted.