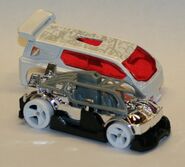 2012 High Speed Wheels Hyperliner with the body off.

2002
Community content is available under CC-BY-SA unless otherwise noted.
Advertisement