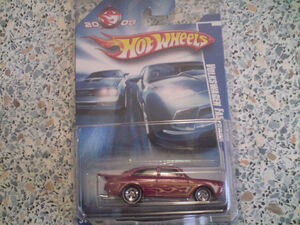 In the Summer of 2009 Mattel Germany started the first Mail In car. For every 10 barcodes you'll get one of the 5.000 free VW Fastbacks from Mattel on long card and in a Kar Keeper. If you sent 20 barcodes you'll get 2 Fastback and so on. It was limited until end of december 2009.

The car was the '65 Volkswagen Fastback in the same variation like the US-car, but the card was a bit different. The US had the writing "Collectors Edition 2009" on the HW-Logo and the German one doesn't have this. On the back of the German Fastback stands: "Bitte für mögliche Rückfragen aufbewahren. German Mattel address, Swiss Mattel address, Austrian Mattel address. Nicht zum Gebrauch mit allen Hot Wheels Sets geeignet. Copyrights and licences."

The most Fastbacks in Germany has a damaged blister. On the left side of the blister is a hole which was caused by the wing from the VW Fastback.

Starting in 2014, Europe has had Mail-ins promotions for cars to exclusively have Gold variations. For more info check out International Gold Editions

In the first quarter of 2015 Mattel Europe held another Mail In promotion. This time the promotion car was a special Chrome Black Rev Rod. After purchasing 4 Hot Wheels cars and send the receipt to Mattel before May 4th 2015, you were send a special Rev Rod on a long card (in The Netherlands the car was detached from its card and sent in an envelope). In every promotion flyer there was a special code. After registering that code, you were send 2 free tickets to the AutoRAI in Amsterdam, The Netherlands, by mail.

The 2015-promotion car is a special, Chrome Black Rev Rod. This color variation does not appear in the (pre-)2015 mainline and is exclusive to the Mail In. On the back of the card is a multi-angle computer graphic along with the usual safety concerns and so.

Selected Dutch stores received an special promotion package. This consisted of the flyers and a box in the form of a picture frame with the Chrome Black Rev Rod centered in it. The box reads: "Wil je ook zo'n EXCLUSIEVE HOT WHEELS AUTO? Bij aanschaf van 4 die-cast Hot Wheels auto's, ontvang je deze GRATIS!!!" Which translates to: "Would you also like one of those EXCLUSIVE HOT WHEELS CARS? When purchasing 4 Die-Cast Hot Wheels cars, it will be send to you, for FREE!!!"

Backside from the German Fastback

little hole under the wing