The technologically superior Iron Man continues to destroy his enemies with the speed and precision one expects from one of Earth's mightiest heroes. This prototype race car's low and aggressive stance enhanced by Nano technology, emphasizes the sleek nature of Tony Stark's alter-ego as he navigates every twist and turn that comes his way. The Mark 50 Bleeding Edge Armor's liquid smart-metal symbiote technology hardens as soon as it connects to Stark's body. Once outfitted, the turbines toward the rear of the vehicle allow for the epic speeds one expects from Iron Man as he takes on a threat unlike any he has ever encountered. The only thing stark about this car, is the man in the suit!

Iron Man Mark 50 has come out in the following 1/64 scale versions: 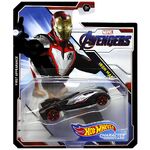 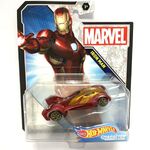 2020
Add a photo to this gallery
Retrieved from "https://hotwheels.fandom.com/wiki/Iron_Man_Mark_50?oldid=379555"
Community content is available under CC-BY-SA unless otherwise noted.