Jabba Desilijic Tiure, better known as Jabba the Hutt and often called the "Bloated One", though never to his face, was one of the most notorious Hutt crime lords in the galaxy, who governed a large criminal empire located in the Outer Rim Territories from his desert palace on Tatooine. At the height of his power, Jabba was one of the most powerful crime lords in the galaxy.

Jabba had started as a small crime lord, but quickly spread his influence into a variety of illegal activities, including spice-smuggling, gunrunning, slavery, and sometimes outright piracy. Known for his cruelty and carnal fancies, Jabba the Hutt was powerful enough to command respect and payment from the Galaxy's ruling government, so much so that during the Clone Wars the Republic went to great lengths to avoid Jabba's displeasure.

This model holds the terrifying Rancor, a large carnivorous reptomammal native to the planet of Dathomir.

The Jabba the Hutt has come out in the following 1/64 scale versions:

The only vehicle that can match the gargantuan proportions and sluggish demeanor of the alien gangster, Jabba the Hutt, is this massive garbage truck.

Jabba's gluttonous eyes can be spotted in the truck's headlights, his enormous lower jaw rounds out the front bumper and his tail extends from the back as a tow hitch. The grating across the roof is reminiscent of the top of Jabba's Rancor pit - it holds a vicious creature inside just waiting to be unleashed on the road!

Rancor in the back 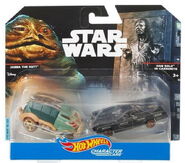 Retrieved from "https://hotwheels.fandom.com/wiki/Jabba_the_Hutt?oldid=316360"
Community content is available under CC-BY-SA unless otherwise noted.