The Jack Rabbit Special was a car in the 1970 Hot Wheels line-up. It is notable for being one of the featured vehicles in the Hot Wheels animated TV series.

During the same year of the regular release, there was a Jack In The Box Restaurant promotional version released. It came in a baggie with header card with the Jack In The Box logos and exclusive sticker sheet.

The Jack Rabbit Special is believed to be based on the 1962 Ford Mustang I Prototype or the 1970 Meyers SR 2 Manx.

The base of the casting reads Jack "Rabbit" Special.

The Jack Rabbit Special has come out in the following 1/64 scale versions: 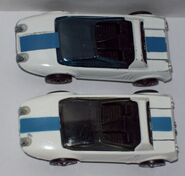 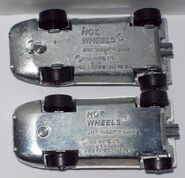 Both USA, but a different base

Both USA, but different rear lights
Add a photo to this gallery

A Fatbax version of this car was released under the name of "Jacknabbit Special" in 2004.

Retrieved from "https://hotwheels.fandom.com/wiki/Jack_Rabbit_Special?oldid=387392"
Community content is available under CC-BY-SA unless otherwise noted.