Jaded is a Hot Wheels original design that debuted in the 2002 Hot Wheels line. Designed by Mike Nuttall, Jaded was inspired by Kaiser-Frazer's low-cost "Henry J" 2-door sedan of the early 1950s, which has since become an American classic and the basis for many street-rods and dragsters.

Jaded has come out in the following 1/64 scale versions:

Born: 2005
Birthplace: El Segundo, CA
Designer: Hot Wheels
Specialty: Equipped with a parachute, wheelie bars, and a large wing, this powerful hot rod was designed to stay under control even at extreme velocities. Take a good look or all you’ll see is it’s giant rear spoiler flying past you. 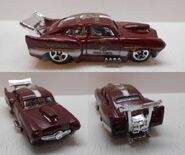 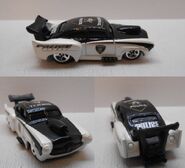