The Jaguar XJ220 was debuted by Jaguar in 1992 for the 1993 model year, and Hot Wheels was right in close behind with a 1993 release of the diecast version. With a top speed of 213 mph (343 km/h), the XJ220 was the first true supercar to be unveiled by Jaguar. Surprising coming from a company with a history of racing gems such as the Jaguar D-Type from the 1950s and the Jaguar XJR9 from the late 1980s. The Jaguar XJ220 stands out among Jaguar's models as a rare gem, a prize for any collector, both in real and diecast form.

The Jaguar XJ220 has come out in the following 1/64 scale versions:

The Jaguar XJ220 has come out in the following 1/64 scale versions:

From the back of Speed Machines card: 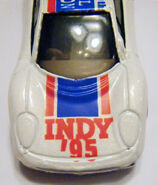 Hood of the '95 Indianapolis Convention Version

Retrieved from "https://hotwheels.fandom.com/wiki/Jaguar_XJ220?oldid=360024"
Community content is available under CC-BY-SA unless otherwise noted.