For the 1997 release, the Jeep Scrambler was renamed Trailbuster. The "Jeep Scrambler" was at the time of the original Casting's release, the Long-wheelbase version of the conventional Jeep CJ-7 series (called 'CJ8' inside Chrysler). Produced from 1981 until 1986, the Scrambler embodied much of the style of 1980s American trucks- high ground clearance, large wheels and roll bars. The casting enjoyed a 14-year original run as a Hot Wheels casting, before being revived in 2009.

Hot Wheels has released in recent years the '67 Jeepster Commando, a prior Jeep pickup truck model from the '60s.

The Jeep Scrambler has come out in the following 1/64 scale versions:

The new tooling of the Jeep Scrambler has been released in the following 1/64 scale versions:

Born: 1980
Birthplace: Auburn Hills, Michigan, USA
Designer: Chrysler LLC
Specialty: With off-road tires, 4-wheel drive, and a toolbox and axe in the bed, this trail blaster was made to welcome you to the jungle. 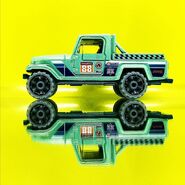