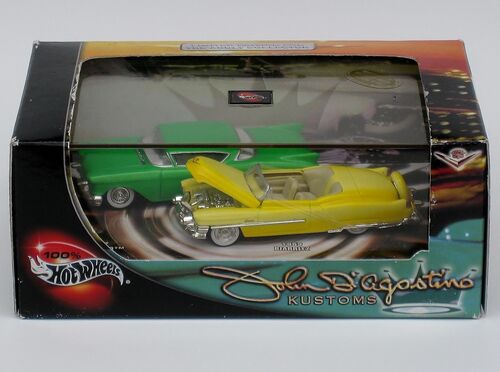 John D'Agostino's kustom kars have been winning major awards for over three decades. This 100% Hot Wheels 2-car set honors John by replicating two classic models, each having contributed greatly to his Hall of Fame status.

"Marilyn" is John's '53 Cadillac Biarritz convertible that won the World's Most Beautiful Custom and the Goodguy's Custom D'Elegance awards in 1998. The car was inspired by a certain Hollywood blonde beauty and was eventually sold at the Pebble Beach auction for $150,000. That's what we call star billing.

The '57 Eldorado add to John's legend. Its long, sleek body was created by lowering the roof and modifying the rear tailfins. From its sparkling custom chrome grille to the '59 taillights in its split rear bumper, this is one cool car and another gem in John D'Agostino's brilliant career.

The following vehicles were included in the 2002 John D'Agostino Kustoms 2-Car Set:

Box Rear
Add a photo to this gallery
Retrieved from "https://hotwheels.fandom.com/wiki/John_D%27Agostino_Kustoms_2-Car_Set?oldid=344273"
Community content is available under CC-BY-SA unless otherwise noted.