The Knight Draggin' has been released in the following 1/64 scale versions:

Born: 2013
Birthplace: El Segundo, CA USA
Designer: Hot Wheels®
Specialty: This dragster owes its inspiration to a medieval knight and the dragon he's just conquered! The advanced spherical motor is styled like a dragon egg, the exhaust pipes are like the dragon's wings, and spikes on the tail serve as a rear spoiler. Your imagination can supply the fire breathing! 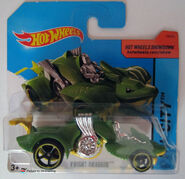 Add a photo to this gallery
Retrieved from "https://hotwheels.fandom.com/wiki/Knight_Draggin%27?oldid=353372"
Community content is available under CC-BY-SA unless otherwise noted.