The Koenigsegg Agera is a very high-performance mid-engined sports car produced by Koenigsegg Automotive AB from 2010 to 2018. Designed by Christian von Koenigsegg, the Agera features a 5.0L twin-turbocharged V8 producing 960 horsepower. The Agera R is a version of the Agera produced from 2011 to 2014 with improved performance and higher power output, notable for setting a number of speed records. The car is notable for its appearance in the film Need For Speed; however the car featured in the film was a replica constructed by Race Car Replicas powered by a Chevrolet LS engine.

The base of the first release reads Koenigsegg CCX, referring to the Agera's predecessor; a model of the CCX has never been made by Hot Wheels. This was fixed on all subsequent releases.

The Koenigsegg Agera R has come out in the following 1/64 scale versions: 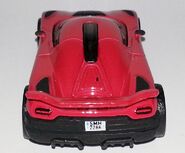 Note the base reads "Koenigsegg CCX". 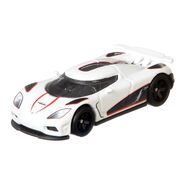 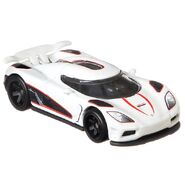 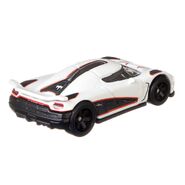 2014 Need for Speed
Community content is available under CC-BY-SA unless otherwise noted.
Advertisement