Released in 1988 and based on the dreams of many from the '70's: the Lamborghini Countach. With it's beautiful futuristic lines and thrill of speed, this Italian-made car inspired many dreams and drools.

Early castings have the wing molded separately from the body. There must have been assembly or tool & die issues, because the wing was later integrated into the body, making it one piece. It was first issued with Ultra Hot Wheels and as part of the Speed Fleet series.

The Lamborghini Countach has come out in the following 1/64 scale versions: 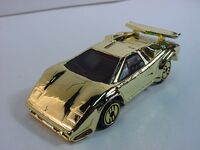 Notes that Tail/Wing becomes part of body.Early versions Tail was separate from body

Retrieved from "https://hotwheels.fandom.com/wiki/Lamborghini_Countach?oldid=157793"
Community content is available under CC-BY-SA unless otherwise noted.