The Lamborghini Reventón is a supersport automobile produced by the Italian manufacturer Lamborghini, between the years 2007 and 2008. It debuted at the 2007 Frankfurt auto show. It was priced at 1 million euros (US $1.5 million, or £858,000) with a limited production run of only 20. Only 3 years later the successor would be created. The successor was the Lamborghini Aventador a relentless force as said directly from Lamborghini themselves.

The Lamborghini Reventón was based on the Lamborghini Murciélago LP-640 platform, with a new body designed after the Lockheed Martin/Boeing F-22 Raptor. The name "Reventón" was in honor of the Don Rodriguez owned bull who killed famous bullfighter Felix Guzmán in 1943.

The Lamborghini Reventón has come out in the following 1/64 scale versions:

Born: 2007
Birthplace: Sant'Agata Bolognese, Italy
Designer: Lamborghini
Specialty: With styling inspired by aircraft and a V12 engine, this exotic sports car was made to fly through the streets.

From the back of Speed Machines card: 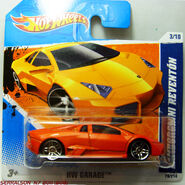 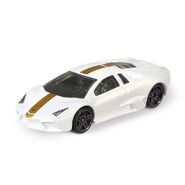 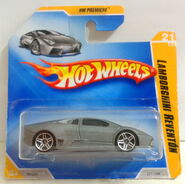 Lambo Reventon - Prem 21 - 09 Cx 1
Add a photo to this gallery
Retrieved from "https://hotwheels.fandom.com/wiki/Lamborghini_Revent%C3%B3n?oldid=312022"
Community content is available under CC-BY-SA unless otherwise noted.