The Lancia Delta HF Integrale is usually considered one of the first hot hatches, it being a road-going version of the HF Integrale competing in Group A of the World Rally Championship. The initial livery of the casting resembles that of a livery worn by the Escort Rally casting used in the Backroad Rally Series.

The prototype of the casting was revealed through popular YouTube die-cast racing championship channel 3Dbotmaker in one of their videos depicting a rally championship.

The Lancia Delta Integrale has come out in the following 1/64 scale versions:

Born: 1994, Maggiora, Italy
Designer: Lancia
The Lancia's eye-catching design and performance engineering, combined with its overwhelming dominance in the world of rally racing, raised its automotive status to legendary. 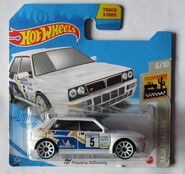 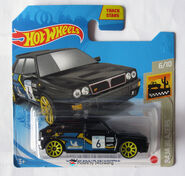