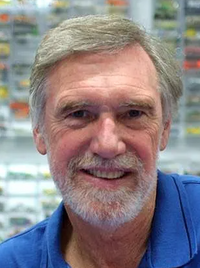 In the late 1960s Howard Rees was tired of designing cars. He wanted to work on the Major Matt Mason action figure toy line-up. Rees had a good friend by the name of Larry R. Wood. They had worked together at Ford designing cars. When Wood found out about Hot Wheels at a party Rees was holding, Rees offered Wood the job of designing Hot Wheels. Wood agreed, and by the end of the week, Larry Wood was working at Mattel. His first design would be the Tri-Baby (1970). After 40 years, Larry retired to his garage but still consults for the brand today. He was inducted in the Diecast Hall of Fame's inaugural class of 2009 and is widely known as Mr. Hot Wheels. Wood officially retired from Hot Wheels design in 2019 and now works as a freelance artist.

Larry Wood has created some of the most well-known and unique Hot Wheels cars, including the '49 Merc, the Boyd Coddington collector set and the Ramblin' Wrecker (which originally featured Wood's phone number on its sides). He has been with Mattel/Hot Wheels team since 1969. He's originally from General Motors. His initials have been featured on some 2009 cars, such as the '41 Pickup and Hiway Hauler. Each one bears the name "Elwood". Elwood is identical to L.Wood in pronunciation. Larry Wood has made a new car series, Larry's Garage. This series features many of his popular designs, such as Dairy Delivery, Metrorail Nash Metropolitan and the infamous Bone Shaker. The car, Cabbin' Fever, bears a close resemblance to Larry Wood's truck.

Signed at the 2009 23rd Hotwheels Collectors Convention in Los Angeles