A leap year (also known as an intercalary year or a bissextile year) is a year containing one additional day added to keep the calendar year synchronized with the astronomical or seasonal year. Because seasons and astronomical events do not repeat in a whole number of days, calendars that have the same number of days in each year drift over time with respect to the event that the year is supposed to track. By inserting (also called intercalating) an additional day into the year, the drift can be corrected. A year that is not a leap year is called a common year. In the Gregorian calendar, each leap year has 366 days instead of the usual 365, by extending February to 29 days rather than the common 28. This page lists the Leap Year models made by Hot Wheels. 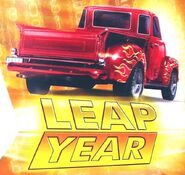