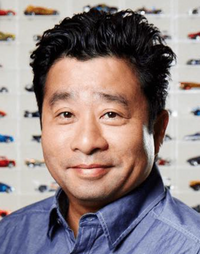 Leeway Chang is a Hot Wheels staff designer specializing in graphics design who has worked at Mattel since 2007.

Born in Taiwan, but spent most of his childhood in Latin America, Leeway traveled extensively before he settled in Southern California. Received his Associate of Arts degree in Communication Design from International Fine Arts College in Miami, Florida and Bachelor of Arts degree in Graphic Design from California State University Fullerton. Leeway designed graphics in the apparel, action sports, feature film, web, advertising and print for 17 years before joining Mattel in 2007. At Mattel, he was the lead Softline Designer for Boys Consumer Products for 5 years before moving over to the Wheels Packaging group as Staff Designer for Hot Wheels Adult Collector, RLC and Premium toy lines. Currently he is the design lead for 5-Packs and mystery packs; he contributes to the mainline basics design on occasion. 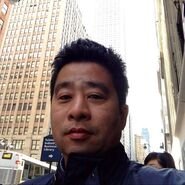 Leeway circa 2009
Community content is available under CC-BY-SA unless otherwise noted.
Advertisement