The Lotus Esprit is a sports car built by United Kingdom car company Lotus. The 2002 First Edition version is based off of the Lotus Esprit V8 model.

The casting was retooled in 2015 for cost cutting; the spoiler was cast into the metal body.

The Lotus Esprit has come out in the following 1/64 scale versions:

Born: 1976
Birthplace: Hethel, Norfolk, England
Designer: Lotus Cars
Specialty: The name is Esprit...Lotus Esprit. Lightweight and super fast with a fiberglass body and a V8 engine, it's no secret why this British beauty is the perfect spy car - originally made famous in a classic James Bond film. The Esprit goes from double zero to 60 in under 5 seconds. Beat that! 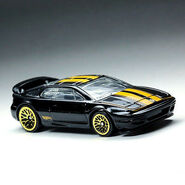