Lotus Turbine was a new casting issued in the 1969 Hot Wheels line-up. It is a model of the innovative wedge-shaped 1968 Lotus 56 which was not only powered by an industrial gas turbine but was also four-wheel drive. In the 1968 Indianapolis 500 the car initially performed well but eventually suffered fuel pump problems, two out of three cars retiring during the race and the third, driven by Graham Hill, crashing early on. A fourth Lotus 56 had crashed during test sessions, killing its driver, Mike Spence. After the 1968 season, USAC rules were changed to ban both turbine engines and four-wheel drive. 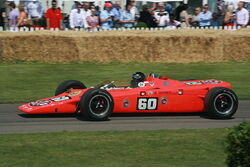 Lotus rebuilt one of the cars, to be entered in Formula 1. Now called the 56B, it had the wings allowed in Formula One added along with better brakes and a larger fuel tank, to complete the entire Grand Prix race distance without refueling. And while in wet conditions the four wheel drive and smoother power of the turbine was an advantage, in dry weather the car was underpowered and overweight. Lotus entered the car in three races in 1971, with an eighth place the best finish.

Interior Colors are: Black, White, Champagne. Some Color/ Interior combos can be very interesting to collect.

Base: Most of the bases are unpainted / bare metal.  There are some early samples which have a black base.  The black paint is usually flaking off by now.  In some very rare cases the bases will be painted silver.  These are believed to be only found in England.

Interior: Black is by far the most common interior color.  Tan or champagne (depending on who you are talking too) has been found in several colors (aqua, green, blue, purple, red, orange).  White interiors are very rare and have been found in a few colors (blue, red, purple, green, possibly others)

Wheels: Typically has the medium size wheel on the front and large wheels on the rear.  However occasionally a car with all medium or all large wheel made it through the quality control.  Also there are two types of redline wheels used, bushing and capped.  The wheels types seem to be fairly evenly dispersed and you can find most colors with both types.  Cars with tan / champagne or white interior only have the bushing wheels.  Also if the base is painted black or silver, it too will have the bushing wheels

Only Made in Hong Kong

Fuel Tanks were Prototyped, They toyed with the idea of making it Set playable.

There is a Chrome New York Toy Fair version

The Lotus Turbine has come out in the following 1/64 scale versions, :

Colors are listed in descending order based on rarity from common to rare.

Silver painted base
Community content is available under CC-BY-SA unless otherwise noted.
Advertisement