The Mad Manga has been released in the following 1/64 scale versions:

From the back of the 2012 First Editions card:

Side View of Mad Manga. Very low to the ground. In the back, the large exhaust is visable sticking up. 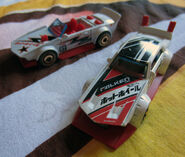 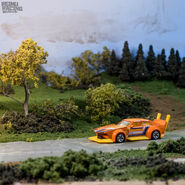