The Mastretta MXT was a low-volume production Mexican sports car produced by Mastretta Cars from 2011 to 2014. Initially powered by a Volkswagen 2.0L GDI inline-4, this was later changed to a Ford EcoBoost engine. The MXR appears to represent a specific version of the MXT, featuring a new wing and the new EcoBoost engine. Production ended in 2014 due to apparent financial mismanagement from one of Mastretta's financiers, putting their Toluca plant on standby and making 45 employees redundant.

This casting is notable as the first casting to be announced for the 2014 Hot Wheels Mainline, in what was, ironically, the year the car ended production. This casting features a raised front bumper to allow it to clear loops; unless looked at closely this is not very noticeable.

The Mastretta MXR has come out in the following 1/64 scale versions: 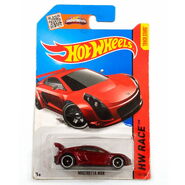