The Mazda RX-3 (Japanese: マツダ RX-三), also called 'Mazda Savanna' (Japanese: マツダ サバンナ) was a compact sports coupe produced by Mazda Motor Corporation from 1971-1978 in Japan and was the predecessor to the Mazda RX-7. The Mazda RX-3 originally was equipped with the same 10 ampere rotary engine as the Mazda Familia Rotary Coupe (also known as the Mazda R100) but RX-3s sold in the US and Canada were equipped with the larger 12 ampere engine used in the Mazda RX-2. The 10A engine's output was 105 hp (78 kW) and 100 lb·ft (135 Nm) of torque. 0-60 mph (0–97 km/h) time was 10.8 seconds. In 1972, a new process for coating the rotor housing was introduced, the Transplant Coating Process (TCP) using sprayed-on steel which was later coated in chrome to increase engine longevity. This was applied to all rotary engines manufactured from 1972 onward.

The Hot Wheels casting portrays a racing-inspired modified RX-3 Coupe with internal roll cage, 3-piece rear wing, Katayama flares and a chevron-shaped front air dam with down-force tunnels on either side. The casting is in left-hand drive, as seen on cars sold in the US, most of Europe and Canada. As of 2019, this is Hot Wheels' oldest model of Mazda in die-cast form.

The Mazda RX-3 has come out in the following 1/64 scale versions: 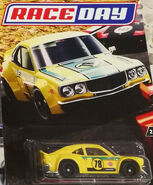 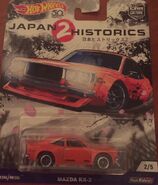 2019 Fast Rewind
Add a photo to this gallery
Retrieved from "https://hotwheels.fandom.com/wiki/Mazda_RX-3?oldid=350101"
Community content is available under CC-BY-SA unless otherwise noted.