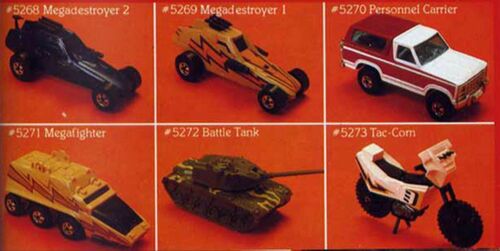 Megaforce  is an action film made in 1982 directed by former stuntman Hal Needham.Mattel Released a special series of hot wheels cars that corresponded to the movie. There were some very unique castings of vehicles, like the Megadestroyer. Some did debut in the Megaforce hot wheels series. Some casting never were to be seen again. Others would live on and just the color/tampo/name changes occurred.

There was one motorcycle that never made it past prototype stage. Story goes that a trash bag of them escaped. So they are out there.

In Newport Beach, Ca there is a MegaDestroyer 1  that was used in the movie on display outside a local business on PCH.

Megaforce Series has come out in the following 1/64 scale versions:

Retrieved from "https://hotwheels.fandom.com/wiki/Megaforce_Series?oldid=130027"
Community content is available under CC-BY-SA unless otherwise noted.