The Mercedes-Benz 280SL was a car introduced in the 1969 Hot Wheels series.

The Hot Wheels version has an opening hood with the 6 Cylinder engine underneath. The Mercedes-Benz logo can be found on the hood and trunk lid. Early versions had Delrin bearing style suspension, then later changed to cap style. As this model was only made in Hong Kong, all production pieces have blue tinted glass (only prototypes have been found with clear glass). The interior came in dark or white. Because the hood opens, the 280SL is often found with a paint chip in the center of the hood where it hits the cowl when opened.

The European-only releases of this casting featured a black painted roof.

The Mercedes-Benz 280SL was re-released in the 1973 lineup with enamel paint. It was also manufactured in Mexico by CIPSA using the 1973 casting, these versions are very hard to find and are usually in poor condition.

The Mercedes-Benz 280SL has come out in the following versions:

Mercedes-Benz 280SL has come out in the following versions: 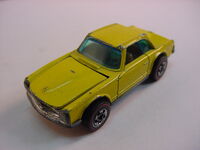