Remember to check what links here and the the page history before deleting. 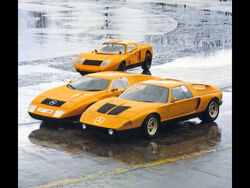 Enamel paints became the normal paints for 1973 due to lead in the Spectra-flame paint. The Mercedes-Benz C-111 was reissued this year with the new child safe paint.

Generally 1973 Hot Wheels will be found with Capped Rear Red-lines and the new Open Axle on the front, but they rarely are found with both open axle (see gallery). In early '74 most models can be found with the same wheel style as there cousin the '73's. Capped rear and Open front. There are few odd ones. The Large Charger and the Vega Bomb are two both are found with capped front wheels. Wheels are very important to pay attention too , they help unravel a era that is not full of detailed history from the design team nor Mattel.

There was only the main line-up for 1973, No series. There were other lin-ups; Revvers, Zowees, rrRumblers, Hot Shots, ChopCycles, Sizzlers, so to complete a entire set of 1973's could take decades, not to mention a house or two, 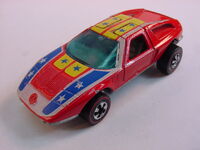 hot wheels redline mercedes c-111
Add a photo to this gallery
Retrieved from "https://hotwheels.fandom.com/wiki/Mercedes-Benz_C-111_(1973)?oldid=312980"
Community content is available under CC-BY-SA unless otherwise noted.