A Minecart is a transportation-like vehicle that appears in the sandbox video game Minecraft. Minecarts can be ridden by pressing the "use" control on them. Once inside, an external impulse may be needed to make the minecart start moving. The player can slowly move the minecart forwards while riding it, by pressing the keyboard key "W". If a mob (short for mobile, living, moving game entities) walks in front of an empty minecart, it will be pulled into the cart. Minecarts have a predefined speed limit of 8 m/s (17.9 mph) per axis of travel (1 in-game block = 1 meter (3.3 ft); 8 m/s = 28.8 km/h (17.9 mph)). A minecart traveling diagonally can therefore travel up to 11.3 m/s (25.3 mph) (i.e. the square root of the quantity 82 + 82). When a minecart comes to a turn it moves diagonally across that turn.

The Minecart is a 2016 New Model, and part of the HW Ride-Ons series. LEGO Minifigures (or minifigures from other manufacturers) are able to be placed in the minecart so they can take a trip down the track. To promote the videogame Minecraft and the collaboration of Hot Wheels and Mojang (the designer of Minecraft), a Target exclusive series of 6 minecarts was released in 2016. The only difference between those models were the exclusive cards which featured six different characters from the game.

The Minecart has come out in the following 1/64 scale versions:

Born: 2009
Birthplace: Sweden
Designer: Mojang
Specialty: What happens when you bring the block building, no-rules game of Minecraft together with the record-breaking, no-rules play of Hot Wheels®? Fuel your imagination and your track with the Hot Wheels® Minecart!

The Minecart as it appears in the Minecraft game. 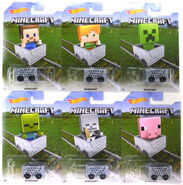 Minecart Series
Add a photo to this gallery

Retrieved from "https://hotwheels.fandom.com/wiki/Minecart?oldid=330019"
Community content is available under CC-BY-SA unless otherwise noted.