The Mongoo$e has come out it several versions, which seems to confuse people about either the name or the car driven by Tom McEwen. First off the only funny car Tom drove while being sponsered by Hot Wheels was a Duster, Mattel in cost saving measures started only issuing one cast( the cuda) years later with both "Mongoo$e" & "Snake" on the side. Mattel official names for the Tom "Mongoo$e" McEwen cars are easy; 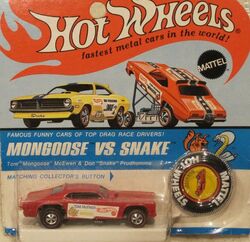 There are also Dragsters:

Tom never even drove a wedge style dragster aka Rear engine.  The "Mongoo$e" was issued in enamel Red. with lifting body to show the chassis, a prop to hold it up and a black roll cage. Modeled after a Plymouth Duster. Was released from both the USA and Hong Kong.

This car is playable in Hot Wheels: Turbo Racing.

Rivalry the "Mongoo$e" vs the "Snake"