Motorized X-V Racers was a series of Hot Wheels cars produced from 1996 to 2000. These were essentially the successors of the Sizzlers castings, which were motorized and flew about the track at high speeds. Each casting came which a charger known as a Power Base Booster. Some reused names from previous Hot Wheels cars.

The series spawned two offshoot series: Motorized Kart Maniax in 2001 and Ferrari X-V in 2005. A number of series in the Motorized X-V Racers line were made. 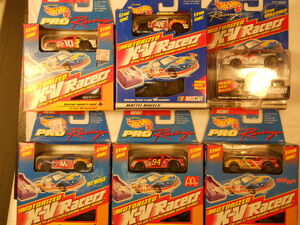 Representing the cars used in the 1997 and 1998 NASCAR Winston Cup, this series was only available in the United States. These were widely available. Internationally, this series was replaced by the Hot Wheels Racing series featuring Formula One cars.

This was an international series of cars; none of these were distributed in the United States. These represented Formula One cars of the 1999 and 2000 seasons. One casting was produced in a number of different paintschemes. Due to their larger chassis, they were given a different Power Base Booster.

This series featured cars that glowed when they were charged. These ran through 1999 with slightly different packaging.

This series featured cars that were advertised as being at least somewhat mud and water-resistant; these were advertised with "X-treme Off-Road Action!". These are larger than most Motorized X-V Racers models. These ran through 1998 with different packaging. Due to their larger chassis, they were given a different Power Base Booster.

Endorsed by Tony Hawk, these were introduced around 1999. These were only available on shelves for about a year. These featured a figure on them and bump-and-go action; if bumped into, they'd reverse. This series was developed by Eric Tscherne.