The Mustang Funny Car has come out in the following 1/64 scale versions:

Released in 2011 this non-opening plastic base model has been completely retooled. It has come out in the following 1/64 scale versions:

Born: 1997
Birthplace: Dearborn, Michigan, USA
Designer: Ford Motor Company
Specialty: You'll be the only one laughing as you pass up the competition is this second generation funny car, best characterized by its tilting body. With a nitro-burning supercharged V8, this trick will tickle more than your funny bone as it burns up the 1/4 mile. 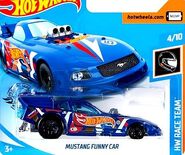